This piece was commissioned by the Cork based ‘Enclave Review’, appearing in Issue 13, Autumn 2015.

‘The untold want, by life and land ne’er granted
Now, Voyager, sail thou forth, to seek and find.’

Occupying all three of the RHA’s first floor galleries, The Untold Want is a group exhibition based on the works and sensibility of the artist William McKeown. In his catalogue foreword, co-curator Patrick T Murphy writes that the exhibition is orchestrated into three ‘stanzas’, ‘stanza’ understood as both a poetic space and a physical one; in Italian, a ‘room’. William McKeown was a painter who often made rooms, and his thoughts, quoted in co-curator Caroline Hancock’s catalogue essay, carry the cadence of poetic conviction. Presenting the artist’s work in the company of artists and ideas he felt close to, the poetics of the individual spaces – the three stopovers on this particular voyage – took on an exclamatory alliteration, broadly discernable as the wow! The whoa! And the oh oh!

The RHA’s largest room is an airy, demanding space, a vast terrain that can put the fear of god into visitors and exhibitors alike. In keeping with its epic reach, the works here allude to ideas of infinity and the vastness of nature. We are in the realm of the wow! The second, smaller room, is a kind of ante-chamber to the first, and a space more attuned to the quotidian than the romantic sublime. The room of whoa! Both of these rooms are supplanted, somewhat, by the exhibition’s final space, its bill-board sized image of a lone bird circling in a turbulent sky signaling the arrival of that worrying, oh oh!

In addition to being too obviously calculated, the gloomy shift orchestrated in the third room works perversely, seeming to undermine the qualities expressed in the majority of the works already seen. But back to the beginning. McKeown’s large oil painting on linen, The Meadow (2008) offers the curious sensation of being simultaneously absorbed and kept at a distance. Spreading veils of muted yellow are held at the top and sides by narrow bands of dark brown. Seen from up close these dark borders appear to bend inwards; a diaphonous lung, the painting seems to breathe in to push the colour out. Past Robert Gober’s little chair, with its bronze box of tissues, Untitled (1997) a single painting by Agnes Martin is also held back, or we are from it, a protecting rope signaling its value in a world she largely escaped.

Untitled No. 7 was purchased for the Hugh Lane Gallery from the 1980 ROSC. Remarkably, for such an unassuming work, it enjoyed some notoriety at the time – coined ‘The Pyjama Painting’ by incredulous Dubliners – but has become a kind of beacon since. Blue and yellow horizontal bands are more like a memory of colour than its substance. Stopping just before the edge, delicately ruled pencil lines mark a gentle resistance to the painting’s symbolic breadth. Martin wrote eloquently about her experience of the natural world and its influence on her work. She described her hope that the viewer might, ‘… go into a field of vision as you would cross an empty beach to look at the ocean.’ (Agnes Martin, ‘Writings’, On The Perfection Underlying Life, 1973) Across the floor, to the rooms furthest end, a second painting by McKeown is called, Ocean.

Looking at the three small mezzotints by Vija Celmans I can feel the weight and dimension of the copper matrices behind their printed facades. They are called, Divided Night Sky, Reverse Galaxy, and Falling Stars. In a conversation with Robert Gober, Celman says, ‘I try to leave the evidence of both thinking and making … like a fingerprint of all I know.’ (Celmans/Gober, Press Play, Phaidon, 2005) The soft abrasions of the metal plates, their burnished parts, are tangible, like a touch against infinity. A photogrpah by Mary McIntrye, not tactile, but one you have to negotiate by way of a low ramp, depicts the corner of an empty art school studio. All whites and greys and soft transitions, its title, ‘The Path to the Distribution Point of Light’ might serve for the room as a whole. This wow! room contains other works, by Byron Kim, Dorothy Cross, Vivienne Dick (and a small drawing by McKeown, almost hidden) but space is limited – even here. The second room, the room of whoa!, is more grounded, and contains one of the exhibition’s more pointed juxtapositions.

Two paper stacks by Felix Gonzales-Torres, Untitled (1989/90), sit solidly on the wooden floor. Beyond them, hung unusually high on the wall, a small canvas by McKeown is called Hope Painting # 26. The twinned stacks differ only in the short text their sheets contain, one reading ‘Nowhere better than this place’, the other, ‘Somewhere better than this place’. This contradiction produces a kind of stasis – a should I stay or should I go moment – that in turn is contradicted by the work’s gradual dissemination. The ‘Hope’ painting hangs on a contradiction too, its title alluding to a future tense that seems allied to its lofty position. But this is misleading, there is no spiritual valence in McKeown’s work, or in the work of Gonzales-Torres. If there is a semblance of it, it may be in how the corporeal and the metaphysical are entwined, as in Walt Whitman’s poetry, or in John Donne’s, whose phrase, ‘… that it first imprints the air’, could be a description of McKeown’s vapourous watercolours. 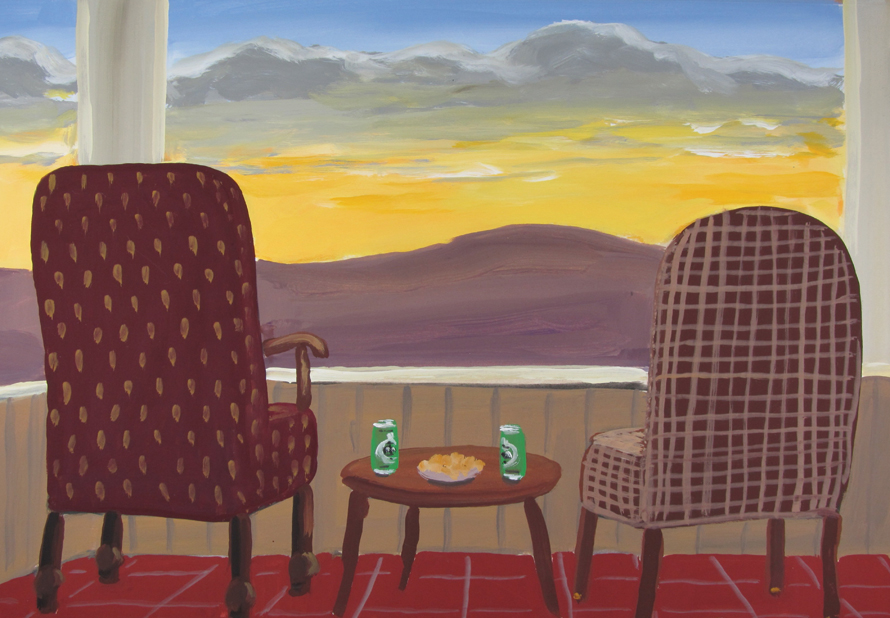 Also in this room, serial works by Frédéric Bruly Bouabré and the photographer Nan Goldin carry everyday scuffs and epiphanies. In Andrew Vickery’s charming, Arcades Ambo (2012), painted scenes recalling road trips made with McKeown are transformed into slides, the simple style of his painted representations enhanced in the sunny glow of the projected light. This mixture of the natural and the artificial recalls McKeown’s constructed rooms, where strip lights or bare bulbs stand in for the sun, or point to its presence elsewhere.

This sense of openness, paradoxically framed by its other, is sadly suppressed in the exhibition’s oh oh! moment. The combination of Ana Mendieta’s 8mm film of a burning effigy, Anima, Silueta de Cohetes, a darkly mute and untitled painting by McKeown (significantly dated 2009-11), and the aforementioned bird by Gonzales-Torres, make for a room of dour melodrama. Like a life perhaps, this room completes an arc, and is legible as such. It is disappointing because in tying the artist’s work to this sense of ending it closes it off from the openness it avowed.

Sounds leaking in from the room next door provided an alternative ending. The inexhorable clicking of slides through the carousel, birdsong, an arcadian waltz; the soundtrack of Arcades Ambo seemed to say that the world is always emerging, a recognition that William McKeown’s work continues to express.

Walt Whitman can also provide an epilogue of sorts. In his earlier, longer poem, I Sing The Body Electric the writer emerges from an impassioned night into a ‘… prostrate dawn.’ Restored to the completeness of nature, he enters, ‘ … the willing and yielding day.’