Action (C1-07) – Ronnie Hughes
Responding to the theme of listing Ronnie proposed I make a set of personal lists. He suggested a number of categories and we eventually agreed on the 10 below.

‘It’s Not You’
Lists can be a way of exposing things, of bringing things to attention by giving them an order and suggestion of value. Ronnie feels these lists will become a self-portrait, a ‘list-portrait’ of myself, within a project ostensibly concerned with others.

Listing as a desire to catalogue and measure is expressed in Ronnie’s paintings and drawings. These works contain ambiguous diagrams and idiosyncratic marks and systems that construct a kind of visual index of otherwise invisible worlds. The desire to make visible is at the heart of his process and may also motivate his direction to me. Concerns about solipsism (too late perhaps!) were allayed when Ronnie assured me the charge was undone by the self-portraiture format. The lists will appear here and in other public domains as yet to be decided. I will make them periodically, interweaving them between other actions, beginning with, and for no particular reason, a list of my favourite items of clothing.
See ‘Clothes‘ 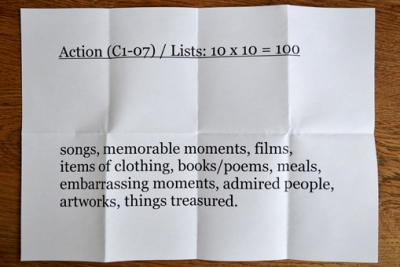